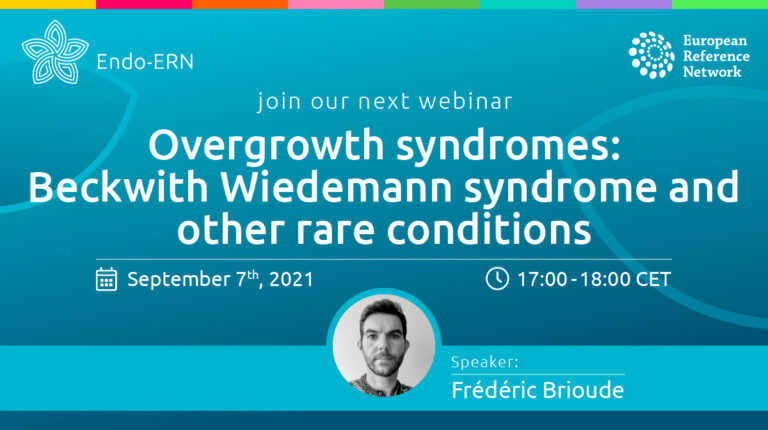 On Tuesday September 7th at 17:00 – 18:00 CET an Endo-ERN webinar about “Overgrowth syndromes: Beckwith Wiedemann syndrome and other rare conditions” will be given by Frédéric Brioude from Hôpital Armand-Trousseau in France.

Overgrowth syndromes are a heterogeneous group of rare disorders characterized by generalized or segmental excessive growth, that can be associated with other features, including macrocephaly or cognitive impairment. These syndromes are caused by either genetic or epigenetic anomalies affecting factors involved in cell proliferation and/or the regulation of epigenetic markers. Overgrowth syndromes are frequently associated with an increased risk of cancer (embryonic tumours during infancy or carcinomas during adulthood), but with a highly variable prevalence, leading to the establishment of screening programs for tumors for some of these rare diseases.

Among these syndromes, Beckwith Wiedemann syndrome (BWS) is an imprinting disorder, characterized by (among others) macroglossia, abdominal wall defects, visceromegaly and hemihyperplasia. This syndrome is mainly due to epigenetic defects (i.e. loss or gain of methylation) within the 11p15 region. Tumour risk is highly dependant on the subtype of molecular defects; thus, this observation led to international recommendations for tumour screening that are stratified depending on the molecular aetiology. Since this consensus in 2018, new data regarding the prevalence and age of occurrence of tumours in BWS have been published, that might lead to new recommendations in the future.

Despite the syndromes having overlapping clinical features, some specific symptoms make it possible to discriminate between different syndromes, allowing specific molecular explorations. However, next-generation sequencing approaches are used nowadays, increasing the number of patients with an identified molecular defect

Mini-survey of the Dutch Pituitary Foundation

The Dutch Pituitary Foundation, the Wilhelmina Children’s Hospital and the Princess Máxima Center in Utrecht in collaboration with European Reference Network for Rare Endocrine Conditions [...]

On Tuesday September 27th at 16:00 – 17:30 CEST an webinar about ePAG exhange of Good practices Webinar – VASCERN flowchart will be given Pernille [...]

The 20th Congress of the European NeuroEndocrine Association (ENEA) will be held from 7 to 10 September 2022 in Lyon, France. The Program Organizing Committee [...]

The Endo-ERN newsletter is out now! Read more about the joint webinar from ESE, Endo-ERN and ESPE, upcoming webinar, CPMS Newsletter, ESPE 2022, Call 4 [...]