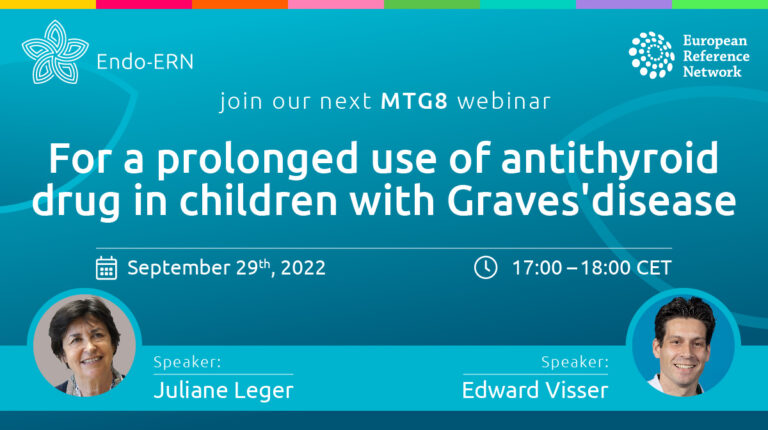 On Thursday September 29th at 17:00 – 18:00 CET an Endo-ERN webinar about “For a prolonged use of antithyroid drug in children with Graves’disease” will be given by Juliane Leger from Hôpital Universitaire Robert Debré, France and Edward Visser from Erasmus MC: University Medical Center Rotterdam, the Netherlands.

Graves’ disease is much rarer in children than in adults. It may occur at any age during childhood but its frequency increases with age, peaking in adolescence. There is no specific cure for the disease. Antithyroid drugs (ATD) are the first-line treatment but they are used for various lengths of time. Alternative treatments such as radioiodine or total thyroidectomy are considered in cases of relapse, lack of compliance or severe ATD toxicity. The best way to manage these patients remain a matter of debate. The remission rate after 2 years of ATD treatment doesn’t exceed 30%. Recent studies have shown more favorable results with long term use of ATD.

IRDiRC, a global collaborative initiative with the vision to enable all people living with a rare disease to receive an accurate diagnosis, care, and available [...]

The ERN Research Training Workshops funding opportunity is now open for applications until October 15th, 2022. The goal of the workshops is to train researchers [...]

Last round for the Research Mobility Fellowships funding opportunity

The European Joint Programme on Rare Diseases (EJP RD) is glad to announce that the last round for the Research Mobility Fellowships funding opportunity will [...]

Mini-survey of the Dutch Pituitary Foundation

The Dutch Pituitary Foundation, the Wilhelmina Children’s Hospital and the Princess Máxima Center in Utrecht in collaboration with European Reference Network for Rare Endocrine Conditions [...]