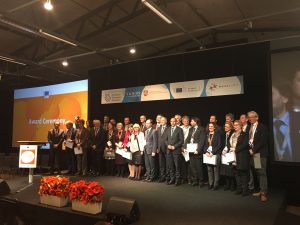 On March 10th, Endo-ERN held its Steering Committee / Kick-off meeting to discuss our governance, multi-annual action plan and action plan for YEAR 1 with chairs of the Main Thematic Groups and Work Packages and Patient representatives. We thank all attendees for their participation and enthusiastic involvement.

Endo-ERN is very proud that we can now officially start working on our planned projects in order [...]

END_OF_DOCUMENT_TOKEN_TO_BE_REPLACED

The first annual meeting will be held in Leiden, The Netherlands on March 27th, with the purpose first to inform and update all members and other stakeholders on the mission, structure, and governance of Endo-ERN, and subsequently to approve the current application by the members via voting in order to be officially operational, and finally to attain contribution of each Reference Center (RC) to the pre-defined deliverables, as specified in the grant application.

END_OF_DOCUMENT_TOKEN_TO_BE_REPLACED

The conference (live webstream will be available here) on 9th will tackle topics such as:

END_OF_DOCUMENT_TOKEN_TO_BE_REPLACED

The European Commission (DG Santé) has adopted on January 26th the Work Programme 2017 under the 3rd Health Programme. This WP includes funding for supporting European Reference Networks (ERNs) with a total budget of 4.600.000 Euros (maximum 200.000 euros per ERN for coordination, management and non-clinical activities, through a Specific Grant Agreement for 2018, under a Framework Partnership Agreement signed with ERNs).

END_OF_DOCUMENT_TOKEN_TO_BE_REPLACED

The European Commission has published a Call for proposals for Projects on Rare Disease Registries for approved ERNs on December, 21st.

To increase knowledge on rare diseases and develop clinical research

Only approved ERNs are eligible to be co-funded. Are eligible applicant organisations which are members of official ERNs. The applicants (coordinator of the proposal and co-applicants) must be legally established organisations, public authorities, public sector bodies, in particular research and health institutions, universities and higher education establishments.